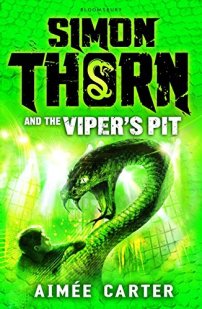 This is the first book of the trilogy about searching for identity.

Twelve -year-old Simon Thorn’s life has never been easy, but being bullied at school and living in a cramped Manhattan apartment with his Uncle Darrell is nothing compared to his biggest secret: he can talk to animals.

When his Mum arrives on a very rare visit, she is kidnapped by ferocious rats and Simon is plunged into a terrifying mission to rescue her. He discovers he can do more than just talk to animals. He belongs to secret race of animal shape-shifters, known as Animalgams.

In the first book, while searching for his mother, he finds the Animalgam Academy located deep beneath Central Park Zoo. There he learns about the fractured five kingdoms – Mammals, Birds, Insects, Reptiles and Underwater and discovers his father was the Beast King who had the ability to shift into any creature he desired. Simon does not know if he will shift into an eagle like his mother or whether he, or his twin brother, will inherit his father’s abilities.

What he does realise is – the Animalgam world is in danger of ripping itself apart and he is the only one who can stop them.

Simon’s character as a loner who finds it difficult to make friends is established from the start alongside the strong themes of loyalty and bravery. No longer is Simon’s only threat the school bully, Bryan Barker, there is a whole underworld of talking beasts after him and it is not clear whose side is the right side to be on. Simon and the reader have no idea who to trust and where their loyalties should lie. The adults in the book are no help as they insist on keeping secrets from him and he is left to discover his true identity alone. Even the few friends he manages to make along the way are innocent by-standers, as he solves the mystery of his destiny.

Aimée Carter takes us on a fast-paced adventure full of twists and turns reminiscent of Percy Jackson. At the end of each book you are left wanting more.

I write children's fiction, non-fiction and teacher resources for a wide range of publishers. I also have two monthly columns in Writers’ Forum, one on writing for children and the other about authors and their research. I do school visits as well as run creative writing workshops . I also review children's books and books on writing and love stationery.

Snow moon #snowmoon #snowmoon2021
Finished the knitted patchwork blanket. I've been knitting this for a few years between projects. #knitting #blanket
Interviewed Caro Ramsey about the research she does for her crime novels. Loved the way she gets her friends to pretend to be dead bodies.
Happy New Year ⠀
I've been asked if I finished the cardigan I showed the start of. I completed it a few weeks ago. Here is the finished article.
Started a new knitting project. It is a liquirice allsort inspired scarf. I am designing it as I knit.