An interview with… Christopher Lloyd

For my Writing 4 Children column in the national writing magazine Writers’ Forum this month, I interview Christopher Lloyd about his inspiration for creative non-fiction books. 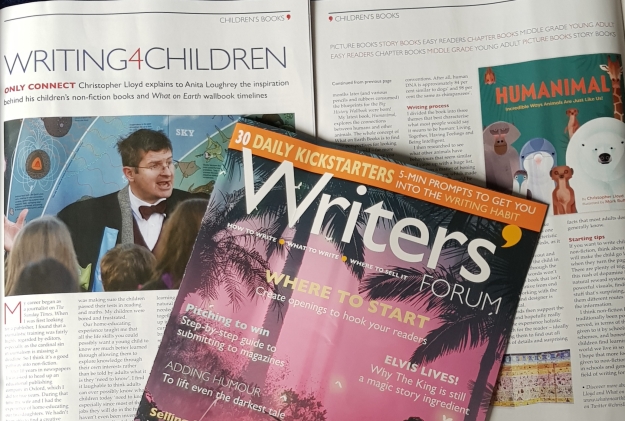 In the interview he explains how he realised that in order for children to explore learning, their own natural curiosity knowledge needed to be stitched back together again, not chopped up into separate subjects and curriculum.

“Afterall, the brain is not divided into separate sections for maths, music, art, languages, history, science – how absurd! It is all connected! So my books became all about ways of connecting knowledge into giant narratives.” (Christopher Lloyd)

Christopher revealed he originally submitted the proposal for What on Earth Happened? as a children’s book but when Bloomsbury bought the rights, they wanted him to write it for adults, so he had to change tracks. Ten years later, the original concept has finally been published (and entirely re-written) as a children’s book: Absolutely Everything! A History of Earth, Dinosaurs, Rulers, Robots and Other Things Too Numerous to Mention. 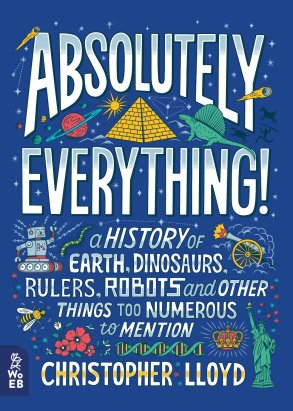 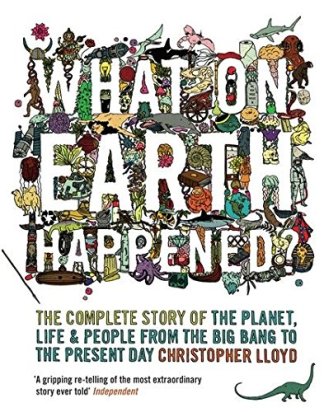 The first Wallbook timeline books were his first children’s books and they were written as a result of his home educating experience. He stuck sixteen pieces of A4 paper together and started drawing pictures and writing captions. Three months later (and various pencil, and rubbers consumers) the blueprints for the Big History Wallbook were born.

His latest book, Humanimal, explores the connections between humans and other animals. The whole concept of What on Earth Books is to find new perspectives for looking at the real world – far more amazing than anything you can make up! Once I had finished Absolutely Everything! I was left with the dangling question in my mind – how clever are humans really? Are we so much more advanced and intelligent that other life around us? Or is that just a human arrogance fuelled by ancient religions and modern scientific traditions?

“Children have an intuitive sense that humans and animals are far closer than many professional adults realise and I thought it would be good to create a book that’s scientifically rigorous but totally accessible to younger people to explore this theme further.” (Christopher Lloyd)

The title Humanimal shows his conclusions were that the links are very strong indeed – far more profound than the differences, hence the need for a new word – describing us all as Humanimal is in many ways, far more accurate than the artificial divisions we wedge between species by using traditional scientific conventions. After all, human DNA is approximately 84% similar to dogs and 98% the same as chimpanzees.

He explained that during the writing process he divided the book into three themes that best characterise what most people would say it means to be human – Living Together, Having Feelings and Being Intelligent. He then researched to see what other animals have behaviours that seem similar and came up with a huge list. It was then a matter of honing them down to see which ones made the best stories and could be backed up by really reliable scientific evidence. The copy then went through a rigorous editing, fact-checking process before he received it back again to make any final stylistic changes with the editor.

His tips for other non-fiction children’s writers is to think what you want to write then think what will make the child go WOW! when they turn the page. There are plenty of triggers for this rush of dopamine in our natural reward system such as powerful visuals, finding out stuff that’s surprising, giving them different routes through the information.

“I think non-fiction had traditionally been poorly served as in terms of the priority given to it by schools in reading schemes and honestly many children find learning about the world we live in so fascinating. I hope that more focus will be given to non-fiction at festivals, in schools and generally in the field of writing for children.” (Christopher Lloyd)

To read the complete feature you can purchase a copy of #222 Apr Writers’ Forum from your nearest good newsagents or order online from Select Magazines.