An interview with… Eve Ainsworth

In December 2017, I interviewed award winning children’s author, Eve Ainsworth, about the issues she covers in her YA books and how she develops the different voices for her YA characters. 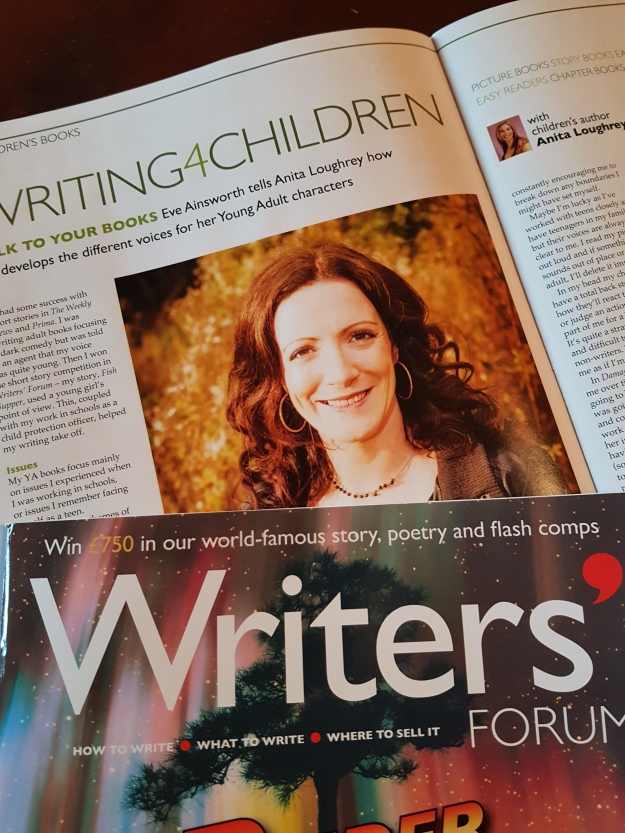 “My YA books focus mainly on issues I experienced when I was working in schools, or issues I remember facing myself as a teen. I explore topics such as bullying, mental health, toxic relationships and self-harm.” (Eve Ainsworth)

In Damage the themes of self-harm, grief and alcoholism are explored. These are quite dark topics. In my child protection role, I had dealt with self-harm cases within the school and was trained in this area. I had regularly spoken to young people who had harmed and had been taught why so many chose to do so.

Eve told me how she had experienced a recent grief in the loss of her father and how this made the writing process extremely difficult. She’d also had direct experience of alcoholism as my older brother died of drink related illness.

Eve’s aim is to increase awareness and understanding by raising these themes and hopefully help to support those struggling.

“I know when I was young, I felt isolated at times and books helped me to tap into the feelings and emotions I was experiencing. It helped me and ultimately I hope I can help others.” (Eve Ainsworth)

Her favourite thing about writing for young adults is the characters’ voices. She love the way they are vibrant, questioning and constantly encouraging her, pushing herto break down the boundaries she might have set herself.

She reads her pieces out loud and if something sounds out of place or too adult, she’ll delete it immediately. In her head her characters have a total back story, she can tell how they’ll react to something or judge an action. She explained this is because they are part of her for a long time.

“It’s quite a strange process and difficult to describe to non-writers. They often look at me as if I’m mad.” (Eve Ainworth)

She told me that characters often send her in a new direction she wasn’t quite expecting – which is both an exciting and fairly stressful event. She discovered from a conversation in her head with Gabi she was even more vulnerable than she first thought and a lot of her pain and fears were hidden in a deep dark place within her. Eve knew she was going to be feisty and headstrong at the start of the book – but it was only through development and conversations she worked out this was just her ‘front’. Her way of preventing anyone coming too close and hurting her anymore. This is particularly evident in her relationship with her mum. Eve didn’t plan for it to be a difficult relationship. Gabi led me that way.

This information created more plot layers for Eve, so her novel became more than just about ‘self-harm’ – it was now also a book about identity and about relationships. Gabi’s relationship with her Mum became key – as the two are very similar in the way they deal with grief and pain. As the plot evolved it was clear to Eve that Gabi and her mum had to work through their demons together in order to move on and heal.

“Voices come from having strong, relatable characters. Once you have a well-defined character in your mind, their voice should be unique –and as I mentioned before, the voice will be with me – in my head, like an old friend nagging at me.” (Eve Ainsworth)

Eve told me that to ensure her characters’ voices are different from each other she uses subtle differences in the writing – phrasing and sentence structures to make the characters stand out. She asks ‘would he say that?’ ‘how would she react to this’? The differences become magnified once the characters are fully formed. Development of character is key. Only once you have a strong character can you have a strong voice. Her tips to other writers who want to get the voice of their characters write is to either ‘hot seat’ or write out a questionnaire asking your character several questions.

Think how would they react to a given situation, or how would they feel if this happened? Consider how your character responds – tone, body language, facial expressions and make notes – all these factors will help you to create their unique voice.

Eve suggests you could get your characters to write to each other, a couple of letters each to help develop their different style. Or write a short monologue in the voice of one character – telling their version of a story (whether it be the one you are writing or something completely new). Then, get your other character to tell their version of events. Read both pieces out loud. Do they sound like two individuals, or the same person? If it’s the latter, tweak – look at the words used again, the sentence structure. The tone. Make them different and stand apart.

A final good exercise that Eve shared with Writers’ Forum readers is is to listen to other peoples’ conversations more. Eavesdrop. Notice how voices are unique and make notes about what people are actually saying to each other, how they say it and what they don’t say. Buses and trains are great places for this, and it’s the reason why I carry my notebook everywhere. You never know what you might discover or overhear. Writing is the perfect excuse to be a nosy beast.

Omodos Village Cyprus #cyprus #cypriot #omodos #omodosvillage #blueskies
I am hosting Kate Cunningham on my blog next week, Tuesday 31st May, as part of her Mary : Adrift in the Sea of Sorrow blog tour. @reading_riddle @annecater14
Fairy Village
The Rose Factory where they distil the rose oil.
Beach day
Wavy day